Johannesburg, 15 November 2017.
Top innovators have received high praises from the Minister of Science and Technology Mrs Naledi Pandor at the 2017 Da Vinci TT100 Business Innovation Awards, showcasing how South Africa is building an inclusive innovation system through growing support for grassroots innovators and developing local innovation.
In total, 28 winners were presented by Minister Pandor with trophies at a gala dinner held at the Johannesburg Country Club on Wednesday, 15 November 2017, which was attended by business innovators, industry captains, government officials, researchers, and academics. 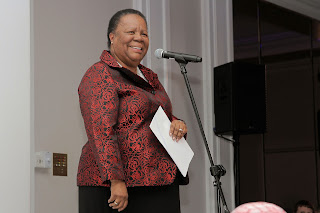 Minister Pandor, who gave the keynote address, expressed her admiration for the quality of business innovation entries in this year’s competition, an achievement she has described as encouraging and in line with the National Development Plan’s (NDP) objective of turning South Africa into a high-growth, employment generating, knowledge-based economy.
Minister Pandor said the long-standing alliance that the Department of Science and Technology (DST) has maintained with the TT100 awards programme was central to the ongoing efforts to strengthen public-private partnerships in support of South African technology-based businesses.
“Such partnerships not only enable awareness creation of business technology development initiatives and opportunities but also profile the innovation prowess of SA tech companies to local and international markets.”
“This is in line with the NDP’s recognition of the importance of innovation as laying the foundations for more intensive improvements in business productivity and a more intensive national pursuit of the SA knowledge-based economy,” said Minister Pandor.
The 2017 TT100 awards were held under the auspices of The Da Vinci Institute School of Managerial Leadership, which has partnered with the DST, MTN, and Eskom to make the TT100 innovation competition possible.
The TT100 awards programme has been running since 1991 and its aim is to promote the culture of innovation amongst large, medium, and small businesses.
“The objective of the TT100 awards is to promote the importance of developing an innovative management ecosystem, which can help boost innovation outputs in our companies in a manner that impacts positively on socio-economic development and the bottom lines of our companies, whether small, medium or big,” said Professor Bennie Anderson, CEO of The Da Vinci Institute School of Managerial Leadership. 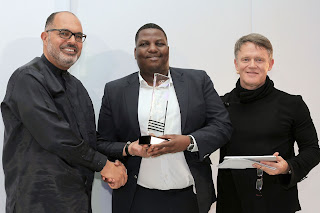 There were 379 entries in the following 6 categories: management of technology; management of innovation; management of people; management of systems; sustainability; and innovation concepts.
A total of 91 category finalists were selected following a rigorous face-to-face adjudication process, which culminated in a total of 28 category winners being selected as the top-performing innovators in 2017.
Four industry winners representing emerging, medium, small, and large enterprises were selected, who respectively received the DST Director-General Award and Minister Award for Overall Excellence.
“This year, we have added the Innovation Concepts category to assist in raising the profiles of innovators who have outstanding concepts, but don’t have the funding to commercialise their concepts.”
“With the addition of this category to the TT100 awards programme, we are hoping to connect the innovators to venture capitalists and other potential funders to enable them to commercialise their concepts and take these promising ventures to the market,” said Professor Anderson.
The 2017 TT100 awards also received a resounding support from Kammy Young, Innovation COE Manager at Eskom, who concurs that the programme will go a long way towards driving socio-economic development in South Africa.
“Innovation is one of Eskom’s values. We strive to embrace new processes and technology to improve business efficiencies, while investing in science, engineering, technology and innovation in the country, with the aim to grow the economy in support of socio-economic development,” said Young.
The TT100 programme provides enormous benefits to winners and finalists. TT100 participants receive intensive, customised feedback on how they manage technology, innovation, people and systems, enabling them to improve the way they operate their organisations.
Winners and finalists receive the additional benefit of becoming part of the TT100 community and being invited to participate in TT100 events, including business forums held jointly with government and partners involved in promoting business innovation, particularly the DST.
ENDS.
About the Da Vinci TT100 Business Innovation Awards Programme
The Da Vinci TT100 Business Innovation Awards Programme is South Africa’s foremost business Awards programme. TT100 has been recognising innovation and technological prowess in South African companies for more than 25 years. In going forward, it is focused on identifying true managerial leaders who through innovation, tenacity and a belief in people, have been able to take their organisations to new levels of competitiveness.
The programme seeks to identify role models within the management of innovation and technology domains who have demonstrated their excellence in co-creating new workplace realities.
For media queries contact:
Alfa Destiny Communications
alfadestinymedia@gmail.com