New horizons have opened up for commercial airline pilot Lean Janse van Rensburg. Where once the outlook was cloudy and visibility limited, his studies at The Da Vinci Institute have given him fresh perspective on life, work and his place in the world.
Grounded and jobless
“After 1Time airlines went bankrupt in 2012, I couldn’t find another job in flying. South Africa has a small aviation market and there were about 90 other pilots looking for work at the time,” he says. “I’d always wanted another qualification in case I lost my medical licence and couldn’t fly, so in 2013 I enrolled at Unisa.”
That didn’t work out, so he kept himself busy doing odd jobs until he happened to see a “random” Facebook advert for The Da Vinci Institute. “I contacted them and we sat down and they reassured me I would get all the necessary support as a student.”
In March 2014, Janse van Rensburg signed up for a BCom degree in Aviation Management. All went well – so well that his average at the end of his first year was 85%.
Looking up
Things started looking even better in 2015 when he joined Safair as a pilot and was earning a salary again.
Then he ran into a hurdle – the Management of Systems module he had to complete for the second year of his Da Vinci studies. “I didn’t know what was going on. I contacted my lecturer Greg. We sat down and he made sure I understood.”
Meanwhile, back at Safair, he was starting to be noticed. “Every assignment I did for my studies had to be work and industry-related. As a pilot, I hadn’t been exposed to finance, marketing, sales and how the operations run, but through Da Vinci, I plugged into these areas. In the process of learning about my company and industry, the company learnt about me.”
Intriguing discoveries
During his research, for example, Janse van Rensburg discovered that flying from Johannesburg to Cape Town with Safair was only R1 more expensive than going by train, and R35 cheaper than going by bus.
He brought this to the attention of management, who liked his suggestion that the company start targeting its marketing at travellers who normally travel by train or long-distance bus.
Other assignments brought him into contact with other areas of the business, opening up all kinds of new possibilities. “I’ve been asked if I would be interested in becoming involved in sales, scheduling, the technical department and even the pilots’ union.”
Now in his third and final year, Janse van Rensburg says he feels “more relaxed” than before about the future. “I know there are opportunities to expand my possibilities of where I could work if I couldn’t fly.”
What’s more, Management of Systems, once his worst subject, is now his best. “The penny has dropped. When Da Vinci talks about how everything is connected, it’s not just philosophy. I really am seeing the bigger picture and how everything fits together.” 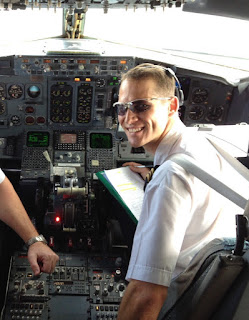