How Jerry’s dream is taking shape
Jerry Makhubo’s dream is to become a university lecturer. That might have seemed unattainable when he was a garage attendant and construction worker, but with a master’s degree behind him and a doctorate in progress, his dream is taking shape.
A resident of Villiers in the Free State, Jerry has come a long way since the bleak days after finishing matric. Despite being the only one in his class to pass with university exemption, he found himself pounding the pavements in search of any job, no matter how menial, that would help his mother keep the family going after his father left.
It’s been a long hard road since then but Jerry, with a little help from a generous stranger, has risen above those circumstances. Now a school teacher with his sights set on becoming a lecturer, he recently enrolled for his doctorate in innovation at The Da Vinci Institute.
Refreshing attitude towards family
“I feel at home,” says Jerry, who still lives in Villiers and attended his first classes at Modderfontein early in October.
“As a mode 2 institution, Da Vinci is interested in people; they support you. Mode 1 universities don’t care about your family but Da Vinci preaches family, family, family, and says our wives must come with us and be part of our studies.”
This is a reference to the Curiosita forum that he and his wife attended at the Da Vinci Hotel in Sandton to learn more about the road ahead. “Yes, I am working and studying at the same time but I won’t find that difficult; I’ve done it before.”
Indeed he has. His first taste of tertiary education followed a chance encounter with a professor from North West University, who had stopped for fuel at the petrol station where Jerry was working.
How Jerry’s life changed
“Prof Coetzee was the one who changed my life,” says Jerry. “When he found out I had Grade 12, he said he would pay for me to go to school.”
That was no idle promise. In 1994, two years after Jerry had left school, he began his four-year Education degree at the University of the North.
Prof Coetzee paid for his tuition for the first two years and then, when it became clear that Jerry was doing well, continued paying his fees and gave him a monthly allowance as well.
Jerry became a teacher after graduating but his thirst for learning – and the encouragement of his benefactor – saw him continuing to study part time. He completed a project management (NQF level 5) certificate at the North West University Business School, followed by his BA Honours and Master’s at the North West University’s Vaal campus.
His doctoral studies at The Da Vinci Institute are the latest milestone in his journey towards realising his dream of becoming a lecturer. “Education is very important. It changes lives.” 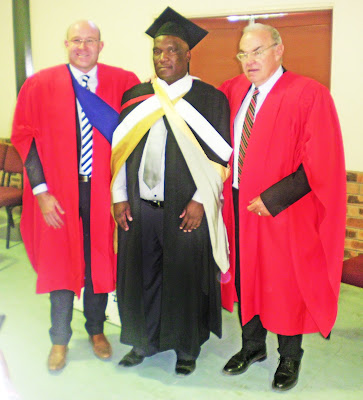