The vast geographical distance between India and South Africa has not stopped Campus Labs, an Indian company based in Delhi NCR, from participating fully in the TT100 awards programme.
With two TT100 awards under its belt already, Campus Labs, specialising in academic, financial and administrative applications for the higher education market, is planning to take part for the third time in 2016.
“We look forward to it,” says Ashish Srivastava, CEO of Campus Labs, which entered the programme for the first time in 2014 – the same year that the TT100 was opened up to companies beyond South Africa’s borders.
In that year, Campus Labs won the management of innovation award in the category for emerging enterprises. In the following year, 2015, the company won the Minister’s Award for Sustainable Performance, also in the category for emerging enterprises.
“We enter because we believe the programme could be a good way to help build our profile in Africa, and because there are similarities in the higher education market in India and South Africa,” says Ashish, who heard about the TT100 through a business contact in Africa.
The awards Campus Labs has won have also been good for the company’s image in India. “Our clients are impressed that we have won international awards.”
TT100 participants from abroad receive exactly the same treatment as South African-based companies, except they interact with the adjudicators via videoconference instead of in person.
“The videoconference session with the adjudicators took a couple of hours and was very detailed. They had many questions for us and we had the opportunity to gain an African perspective on our business. It was a great experience.”
Ends
How often does a small business have the opportunity to learn directly from the best and most successful companies in the country across all industries? That’s relatively rare in the normal course of business. On the TT100 Awards Programme, it’s one of the benefits of participating, says JD Henderson, managing director of X/procure, a regular entrant since 2007.
“In the years when we didn’t win, we networked with the winners to find out what they were doing with their systems, people or technology that we weren’t. They were willing to share and we to listen, just as when we have won, we were willing to share,” says JD Henderson, managing director of X/procure.
Exposure to the best practices of top-performing small, medium and large companies in many different sectors has brought practical benefits to X/procure, whose electronic procurement software is now used by more than 65% of pharmacies in South Africa.
A simple but critical example of lessons taken to heart is the necessity of running failsafe systems that are fully redundant and comprehensively backed up so that clients restocking their pharmacies with medicines are never let down if one link or switch goes down.
“But what’s really amazing for us is that as we grow our technology platforms and stabilise our systems, we are expanding into other industries,” JD says. “We’re now expanding into liquor, where the supply chain is virtually the same as it is in pharmaceuticals.”
The inspiration for this expansion was none other than the TT100 programme. “While we were networking, we saw that these guys (winning companies) were diversifying, and we asked ourselves how we could do the same.”
Changing a weakness into a strength
However, the area where participating in the TT100 has been most valuable to X/procure, according to JD, is in the management of its people. “We identified that as a weakness,” he says. “Software developers and programmers are generally perceived to be introverts; they’re not really socially out there. So we wanted to know what others are doing to win in that category.”
The lessons X/procure brought home from its networking included introducing flexible working hours and leave, and innovative employee wellness initiatives. As a result, by 2015, the company had turned its perceived weakness in managing people into a strength: X/procure won the Management of People category in the small enterprises section of the TT100 in 2015.
Also in 2015, by the way, X/procure won the Management of Innovation category for small enterprises, the Minister’s Award for Sustainable Performance and the DST Director-General’s Award for Overall Excellence. And the company was a finalist in two other categories, the Management of Systems and the Management of Technology.
Interestingly, JD says X/procure has been invited to participate in other awards programmes but would rather stay with the TT100. “None of the others are as focused on our core business as the TT100. Nobody else has a model like the TIPS model. For us, it works.”
Ends
Carol Varga at Carol@davinci.ac.za 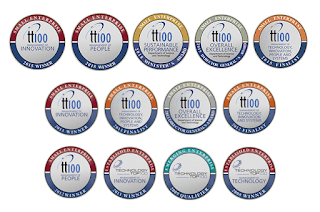